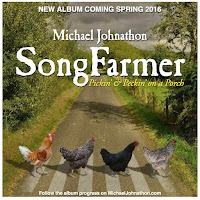 So, I decided I want to record another album. It's time. And I have a passel of songs that are ready. I'm simply in a puzzlement as to HOW to do it.

Years ago it was the norm for an artist to spend $20,000 or more in a studio with great musicians, carefully laboring over each song, making each note and inflection perfect, making each song mix the best possible. Then taking the finished work to a mastering studio, refining every audio wave and EQ so the album will stand the test of time ...

... only to have most of your fans listen to the thing on a $9 set of earbuds while on a treadmill in a gym. Or in a car going 70 MPH down the interstate.

It is part of the demise of the record industry. Records are, essentially, gone. Record stores are gone. Record companies are folding. For the most part artists sell the bulk of their CDs at their own concerts and live events, not stores. So, if we look at the situation honestly, record labels sign the biggest customer of their own CD when signing an artist. So why be part of a record label and give away all your equity? It makes no sense.

Even worse: we are living among the first generation of human beings that hear music as a flat screen, digital two-dimensional experience. They don't even get to hold a ding-dang album jacket anymore (that's why, if you are fortunate to have a hometown, indie record store, support them. Don't get your music from websites when you are one of the precious few with an actual record store).

HERE'S A PAINFUL FACT: nobody listens to albums on stereo systems anymore (this is not a reference to LPs but to the entire recorded project, whatever format). Oh sure there are exceptions, but the truth is most folks listen to music as crushed low res MP3 files on smartphones in crappy ear buds with little or no sonic quality to them while jogging. In short, we have learned to listen to mostly crappy music on crappy playback systems in crappy environments.

HERE'S A SECOND FACT: the public is not only getting used to the lower quality playback of music, they are being conditioned to hear only singles from a project. The MP3s are loaded into their phone and are played on shuffle ... one song at a time. Kind of a personal Pandora playback. It leaves visionary artists in a quandary as the presentation of a concept album - a full musical cycle like Pink Floyd's The Wall or the Beatles Sergeant Pepper - has become extinct.

HERE'S A THIRD FACT: music is as much visual as it is audible. As the idea of physical records die, so dies the majesty of the album cover. Holding the album jacket in your hand, reading the lyrics as the album played drew fans deep into the magical world being presented to them. The current two-dimensional music world is shallow by comparison. The problem is folks only know it if they knew it from before. Fans today don't have a clue of this because there is an entire generation of humanity who have grown up experiencing only the flat digital experience of music.

Think of what is really happening: they are emailed a MP3 of a band from a friend, Google the band, YouTube the band, iTunes the band then download the band. They've never even seen the band live. Who could have predicted just five short years ago that record store chains would collapse nationwide and Cracker Barrel would become one of the biggest retailers of CDs in America? And to make matters worse, fans have gotten used to getting music as free MP3s.

It's gotten so wacky that new cars don't even have CD players in them anymore, just a USB port. 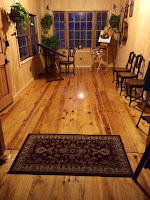 So here's what I'm doing: the SongFarmer album is being recorded in the same format the public is being trained to listen on: an iPhone.

Which, oddly enough, isn't all that bad.

The iPhone is a recording platform that far surpasses what the Beatles recorded Abby Road on. I'm using a special hi-end mic made for iPhones and iPads by Apoge, a special recording app for iPhones (no, not Garage Band) and using my artists cabin as the studio, which has very beautiful acoustics and a warm, natural reverb. Wood tends to help with that.

The SongFarmer album is a folk album, performed in single takes with just my Martin 0000-28s guitar and long neck Vega banjo. New original songs like Hippy Luv, The Coin, Rainbow Wife and traditional banjo songs like Little Maggie are included. There is little-to-no editing involved.

I like the songs a lot and will be including the long story song Pamper Creek. I wrote the lyrics while living in Mousie KY after seeing the big Sandy River flood between Prestonsburg and Pikeville. I asked a fellow how high the flood waters got and he said I would be able to see myself by wherever the Pampers where hanging from the tree limbs. It's sort of a modern day Appalachian Alice's Restaurant.

The album has a more important use, though. It will introduce the fine efforts of the WoodSongs Front Porch Association to media and radio stations around the world. We call our WFPA members "Song Farmers," thus the album title, and members will get a free copy of the physical CD when they come to the big WoodSongs Gathering Sept 23 and 24, 2016 at SHAKER VILLAGE near Lexington, KY.

The album should be finished and ready for release to radio early spring 2016. In the meantime, join the WFPA, get free tickets to the Gathering ... and a free SongFarmer CD. Visit SongFarmers.org or call 859-255-5700 to sign up.

The mission statement is: To gather the global community of front porch minded musicians, bring roots music education into school free of charge, and enhance communities by redirecting the energies of local musicians.

Keep visiting the MichaelJohnathon.com SongFarmer page for updates, pics and a diary of the album progress. When it's ready the first single from the album Pamper Creek will be, drum roll please, downloadable as an MP3 for free.

Then you can listen to it on your smart phone with crappy ear buds while jogging :) 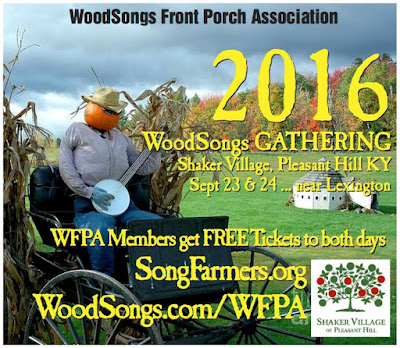 Posted by Michael Johnathon at 11:12 AM

We are anxiously awaiting the new album and are also looking forward to meeting again with all the Song Farmers next year at Shaker Village. I am still flying high from our time at the Museum of Appalachia recently. I am in contact with others on Face Book. Denise and Rick Kennedy and I share regularly. They are the married couple from Ashland City, Tn. He plays the stand up base and she plays the Autoharp. Thier friend plays the Mandolin. They call themselves The Mountain Melodies. Anyway, WFPA is making a great change in our lives around here, and we anticipate what is coming down the road. Thank you, Michael and all of Woodsongs for making all this come about.

God Bless you all, brother,

Of course that includes all of us at K'zoo Folklife in Kalamazoo, Michigan