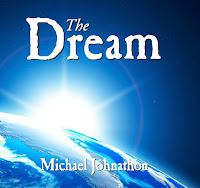 _
“If art is to nourish the roots of our culture, society must set the artist free to follow his vision wherever it takes him… We must never forget that art is not a form of propaganda; it is a form of truth.” ~ John F. Kennedy


The DREAM is my latest album.

It is one of the hardest artistic projects I've ever pulled off. In my heart it was almost like giving birth ... painful, fearful, agonizing followed by shear exhilaration and pride when it was over.

It many ways. it was like giving birth to a rhino with the horn still attached.

The title song is about our earth at peace. It has four children's choirs singing in English, French, Spanish and Russian. The center piece of the song is when they all sing in their native languages but in unison. It is followed by the musical explosion of a 61-piece symphony orchestra. I wanted the song to be as majestic, powerful and universal as the concept of peace itself is.

Which brings me to the COVER ART on the album, but before I explain that you should really listen to the song first, click the link below:

It is not my intention here to be political, but to speak as an artist. To me, the world is saturated with beige-minded, vanilla-thinking, boring, common, unadventurous "stay- 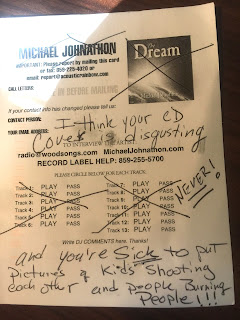 If they are out there, you don't hear them because even radio is hesitant to speak in that voice. Remember what happened to the Dixie Chicks? Silence condones the actions of the fearful.

Oh, I don't blame them, after all we have families to feed, rent to pay and as society restricts freedoms and rewards those who stand down instead, art will often "stand down" with it. But art shouldn't be that timid. Or shy.

"Art is a revolt against Fate." ~ Andre Mairaux, France

When the collection of the songs for The DREAM album were sequenced and I sat in the studio alone in the dark and listened for the first time to all the compositions in order, I began to envision the jacket art. It kept me up at night for days as it consumed the theatre in my mind.

The title song was about the earth at peace ... but the TRUTH is the earth is NOT at peace. Years ago, album art was a powerful part of music. I remember as a kid being consumed with Steppenwolf's cover of an army of mice, the smudged makeup on Don McLean's thumb on American Pie, all the faces on Sgt. Pepper. The cover sucked me deep into the music.

Then music shrunk down from an LP to a CD, print became so small you can't read it and artists began to lose their imagination. Now, everybody downloads and there is no more cover art at all. Most covers gives you the standard artist posing in front of a woodshed. Or posing in a field. Or posing wherever. Boring. Here's a news flash: I have never released an album with my picture on the cover.*

“Art is the lie that enables us to realize the truth.” ~ Pablo Picasso

So I wanted this cover to be special, powerful, a statement. I created it to be an anti-statement to the song, so the song would have power. I wanted the jacket art to show visually what the song was hoping for musically. When I first showed the album jacket to Melissa, her reaction was to love it first followed by concern ... she didn't want to twins to ever see it.

That was good, actually. The DREAM is not for kids because they are the peacemakers. It is for grownups, the ones actually causing all the violence.

The OUTSIDE cover reflects the gentle hope of the song. The earth, majestic and beautiful, distant and close, incredible and mysterious. (click to enlarge)

But the INSIDE ... the inside is about the truth. It deploys the explosive anger that we destroy ourselves, our culture, yes, even our children with. It is graphic, brutal and, sadly, accurate. (click to enlarge)

Above is a response card we got from a radio DJ. This person saw the cover and made a judgement about the album and about me without even listening to the song. I love our community of radio friends but please notice this coward didn't even sign their name. MY name is on my album. It is MY statement, I am proud of it and I stand by it openly. This wanker is hiding behind anonymity like a fearful hatemonger.

Yes, the cover art has terrible things children are doing to each other, as taught by violent, horrible adults. The song has four children's choirs asking, pleading for this to stop. This DJ didn't get it. I bet they have no problem watching this kind of horror in their living room over cornflakes as they watch CNN in the morning. I bet they watched planes crash into buildings, burning thousands of people alive as the building fell. I bet they watched it over and over on their TV set. I bet they watched a woman get crushed to death followed by others dancing around her body as their children sat with them on the couch watching the Wizard of Oz.

I bet they have a golden murder weapon hanging around their neck and kiss it whenever they pray, too.

Some people think The Dream is a musical prayer for peace. It is not. It is actually a song about God asking US to stop it. It's God's prayer to mankind, not the other way around. It not a religious song, it is a song, a request, about protecting this wonderous creation by the one who created it to the ones he created.

"It takes an artist with heart to make beauty out of things that makes us weep.”~ Clive Barker

So ... the album has been released to almost 2000 DJs and radio stations. I wonder if they will play it, or will they reject this child I gave birth to. We shall see.

But to all my fellow artists, I implore you: start thinking like an artist. Don't think outside the box ... destroy the box. Don't write a few songs and slap them on a boring CD and expect people to be moved. The world is saturated with the mundane. We are drowning in an ocean of beige. Be brave instead. Shake and rattle and crush. Make people react, feel, object, laugh, weep and cry. Be bold and fearless. Take risks and jump into the deep end of your soul to see what lies at the bottom.

Invest in yourself, take chances with yourself ... because if you won't no one else will, either. And if you ever get a burr up your britches and you send hate mail to someone, at least put your name and address on the ding-dang thing.

For a copy of the album visit: MichaelJohnathon.com/thedream


* Postscript ... I remembered an out-of -print LP has my picture on it. Actually it's a picture of a photograph of me. Go figure ...


Posted by Michael Johnathon at 1:14 PM

Excellent points Michael. I'm older than you, but I remember the '60's, the Draft, the Freedom Riders,the Vietnam War, Nixon, and all the protests which were mostly peaceful. Songs were sung (with real music) to vent our feelings. People celebrated peace. What happened?