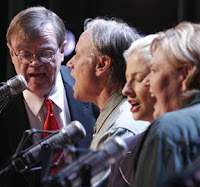 Last night at WoodSongs we had a tribute to the music of A Prairie Home Companion with our friends Robin & Linda Williams and the great master instrumentalist Peter Ostroushko. Both have been on the legendary show for about 30 years, since the early days - before syndication when Garrison had a daily show on public radio and they played and sang in a little studio room.

Much the way WoodSongs started.

As much as I looked forward to the day, it was riddled with disasters. After writing the script and putting the show concept together, I got an email from one of the folks who work with me. Her father passed away. So very sad.

Then Scott Napier, who played mandolin on the show with me for a year, was coming back to make an appearance and play a banjo/mando instrumental with me called the Pete & Woody Rag. But we are in the middle of a deep freeze and all the pipes in his log cabin froze up and burst, so he couldn't make it.

OK, says I. Pete's on the show, maybe he will play it with me. After all, he's one of the best of the best, it would be an honor.

I get to the theater and the lights in the grid are blowing out so the crew is distracted trying to fix it, our stage manager is stressed because his young wife is heading into the hospital, our TV director's wife is in labour and her contractions are 15 minutes apart, the theater is over sold and the audience is freeking out about seating.

No problem. A cup of hot tea and a quiet moment in the dark hallway backstage before I go on. I'm leaning against a door jam with my right picking hand and a crew member comes up without noticing and SLAMS THE DOOR ON MY MIDDLE FINGER.

Ouch! And I'm supposed to walk on stage and play the banjo in 4 minutes.

When you watch show #468 on my archive page, you will notice that my hand is shaking and I start and stop the song. Peter, good natured pro he is, hung in there with me. I decided to redo the song again after the taping during the encore. I think we got it, but I had to have my hand in a rag of ice for the entire show to keep the swelling down.

Well, we got it done. The show was a success. The audience was happy. Of course, now when ever I think of Garrison, my middle finger will probably start swelling.

Michael
Posted by Michael Johnathon at 10:41 AM No comments: 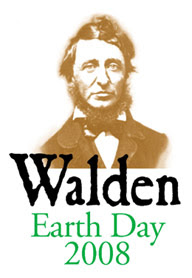 Yes, I know at the moment it's freezing across half the north American continent ... but it will be here soon enough. And with spring come thoughts of green living, warmth, life, planting gardens, mowing the grass again.

Last year, we launched the play "Walden: The Ballad of Thoreau" which is a four character, two act project about the final two days Henry David Thoreau spent in his cabin before leaving Walden Pond. The play, lesson plans, posters, director's notes and more were available free of charge to any school, college, community theater or home school that wanted to put on a show.

Over 4,011 schools registered for the play in nine nations. Including Korea, Egypt and Syria. Wow.

This spring, it is available again ... and this time in Spanish and French as well. Prisons have registered, a lot of home schools, and now the Radio Drama of the pay will be posted on the www.waldenplay.com website for any fan to listen to ... fully produced, great acting. And free.

The album, Walden: The Earth Song Collect is released and if you order it from the website you get a free T-Shirt. Not bad for $11, and the money is used to support the free performance of the play in schools.

Spring time. Earth Day. The Walden play ... and a free T-Shirt.
Not a bad way to head into summer :)

MJ
Posted by Michael Johnathon at 11:37 AM No comments: