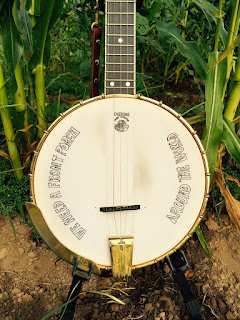 It's a great word. Much better than "folksinger" or songwriter or performer. It is a poetic way to describe someone who uses their music to plant artistic seeds in their communities, their families, their careers.

We call the members of the WFPA "SongFarmers."

When I was creating the WoodSongs Front Porch Association (WFPA) I was trying to provide an alternative to other great efforts like the Folk Alliance, the IBMA or the Americana Music Association. These are music business trade groups that try to help musicians, record labels and agents connect to enhance the artist's careers. The WFPA doesn't complete in any way with those very fine folks. Heck, I'm a member.

Problem is, if I can speak plainly here without sounding like I'm pointing fingers ... there is no music "business" anymore. Not for the tens of thousands of small artists playing at farmers markets, retirement homes, small noisy clubs, schools and front porches across the land. Records stores are essentially gone. Record labels rarely sign artists, if they exist anymore at all. Booking agents don't take on many new artists because so many venues have shut down they can hardly keep the artists they have working no less a new act.

Small, talented, sincere songwriters, performers and artists are then asked to pay for association memberships, conference fees, travel, hotels and meals ... often $1000 or more total ... to attend a trade organization event where they, if they are lucky, end up showcasing in front of other anxious artists who wish they had your time slot. And instead of being helped to understand what to do with a garage full of unsold CDs in a world with no more record stores, you might be treated to a two hour speech that have nothing to do with music or the issues at hand.

To a SongFarmer, the front porch is as an important a stage as a concert hall. Their banjo is a community plow, their songs are like seeds, their guitar is a hammer and saw. Music is an issue of the heart, not their wallet. They don't make fans, they make friends.

With the WFPA I wanted a new way to reach out to artists in a way that will REALLY help them, REALLY explain the new music world, REALLY point to a brand new direction for their music and careers. I wanted the WFPA to be very cheap (just $25 a year) And to attend our yearly conference, called The Gathering, they get to come FREE. The WFPA needs to be very effective and have a solid, realistic goal.

And indeed it does. Not only does the WFPA offer realistic help to the community of SongFarmers, but we are sending roots music into thousands of schools and home school families with lesson plans. All for Free.

And before all you finger-waggers get started, I'm not putting down the FA, IBMA or AMA. I don't think they are lying to anyone. I do, however, think they are lost in an old business model that no longer exists.

Heck, new cars don't even have CD players in them anymore. The music world is upside down and inside out. Who would have guessed just five years ago that today one of the biggest retailers of CDs in America would end up being a restaurant chain? And, no, it's not Starbucks ...

Artists need to have a brand new outlook on music. They have to have a truthful, painful look at what is really happening out there. They need a spectacular new direction for their music. And they HAVE to learn, as brutal as it may seem at first, how FREE works.

So, this weekend, we will have our first WoodSongs Gathering, a music festival and member conference of the WFPA. We call our members SongFarmers, and it will be at the amazing log cabin village of the Museum of Appalachia near Knoxville, TN. We have a spectacular creative board like Art Menius, Kari Estrin, Josh Dunson, Raymond McLain, Doug Oines, Steve Martin (IBMA) Reggie Harris and others helping guide the event, the members and intent of the WFPA. It's the real deal.

SongFarmers are taught the most important rule of the new music world: LOVE is the most important transaction of the arts. It isn't marketing, management, what record label you're on or who your investor is. All of that is irrelevant without LOVE. "Love" makes the world of art work. Think of it millions of people spent a billion dollars on an album, not because it said RCA ... it's because they LOVED Elvis. It's love that makes the audience buy a CD, buy a concert ticket, buy a T-Shirt.

Nashville has virtually lost it's entire music middle class because the bean counters focused on marketing and money ... not love. The only thing ... THE ONLY THING ... the audience responds to is their love for a song, love for an artist, love for an idea.

SongFarmers learn to direct that love in a way that does not focus on money. They focus on their families, their hometowns, their audiences. SongFarmers resurrect the emotional front porch in everyone who hears them. 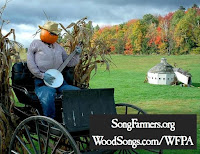 Just about a year ago, I performed a concert in Winnsboro Texas and two wonderful songwriter friends opened the show, Lynn Adler and Lindy Hearne and they gave me a little bumper sticker that proclaimed their lakeside cabin home in Texas an "organic song farm." That little sticker sat on my desk for months and then one day, as I was organizing the WoodSongs Front Porch Association it occurred to me that "song farming" is exactly what we are trying to do. Our members would be called SongFarmers.

I called them up and said would you mind if we stole your word? lol. They said, go ahead, we stole it from someone else. It was so Woody Guthrie:

"Aw he just stole from me. But I steal from everybody. Why, I'm the biggest song stealer there ever was."

I think Woody was a SongFarmer. So was Jean Ritchie and Pete Seeger. So is Rik Palieri, Raymond McLain and most of the music world filled with artists who love playing more than anything else.

So join the WFPA. Become a SongFarmer.
Change your thinking about the music business for the better.
And see the amazing work our members are doing.

The mission statement is:
To gather the global community of front porch minded musicians, bring roots music education into school free of charge, and enhance communities by redirecting the energies of local musicians

Visit WoodSongs.com/WFPA or SongFarmers.org and come to the WoodSongs Gathering Sept 25 and 26 at the Museum of Appalachia exit 122 off I-75 ... sing with new friends among the autumn leaves near Knoxville TN.

Posted by Michael Johnathon at 2:19 PM No comments: