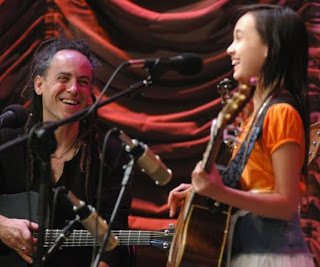 I had songwriter JJ Grey and The Duhks on show #515 of WoodSongs. The broadcast went well, the theatre was full, the crew was great. Usually, when I am surprised that the hour is over (we tape the show in one solid 59 minute take) it usually means that it will be good ... and this show fulfilled that for me.

After the taping was over, we did the radio promo's and the TV spot. Things have changed and we don't do those at the Theatre anymore, which is better for the audience, I think. Anyway, it was time for the encores.

Now, a few months earlier a WoodSongs crew member named Ruth Adams was at the Saturday morning Farmer's Market in downtown Lexington. This used to be great event, situated along Vine Street along three blocks of sidewalks and farmers would set up their tables and tents along the way setting out freshly picked tomatoes and corn and everything you could possibly want. People would stroll along with coffee and kids in hand, musicians would be set up on each sidewalk corner, singing ... or "busking" as it is called ... to the hundreds of people milling about on a lazy Saturday morning.

There was a little girl busking that morning, a little tiny explosion of a smile, playing her guitar and harmonica, belting out everything from Dylan to Neil Young. Ruth called me up and thrust her cell phone in front of the little girl as she played.

"Not bad for an eleven year old kid," says I.

Fast forward several months now back to the stage on WoodSongs. The encores are about to begin and I notice through the TV lights this little girl sitting with her parents toward the front of the theatre with her guitar in her lap. Turns out she's a JJ Grey fan, so I go with the moment and invite her up onstage to get it autographed.

Of course, she wasn't about to limit the opportunity to just that, and proudly announced that she loved JJ Grey and actual re-wrote one of his songs. Oh really ... and it occurred to me that this might be that little kid I heard through the cell phone a few months back.

So, I pulled the mic off the stand and held it in front of her ... and Almira Fawn unleashed a beautiful guitar and harmonica rendition of Appalachia, while JJ Grey stood on stage in total, complete surprise.

We had quite a conversation after the show. I met her dad and mom. Don and Umi were very supportive parents who deeply loved Almira, and it was very clear to me that they were supporting Almira's own passion, not pushing her to do anything. Almira was driving this boat and mom and dad were there to help her set sail.

Eight weeks later, I worked with her mom and dad and, on WoodSongs show #523, Almira Fawn was a featured guest on the broadcast, the youngest I've ever invited. That broadcast just aired on PBS stations across the country. The pic above is Almira on that show with her guitar teacher, David McLean.

This past week, Almira's mom was beaten to death outside her home here in Lexington. I don't know where this story is going to go, or how it is going to end. My own son is about Almira's age and I can't for the life of me ever imagine this kind of shock or pain being injected into his little life. All I know is that on Tuesday, Almira was getting ready to move to Nashville and begin her new career with her new manager and agent. She had her home, her family and her life.

By Thursday she was placed into protective foster care and her mom was gone forever.

I'm hugging my kids a lot lately. I'm consumed with them and telling them I love them a lot. And my heart goes out to little Almira and what is left of her family. I hope in the core of my spirit that she ends up being OK. And I hope she uses her music to heal again.

Maybe you can help her, just go to www.almirafawn.com and buy one her CDs.

Michael
friend and dad
Posted by Michael Johnathon at 7:57 AM 4 comments: