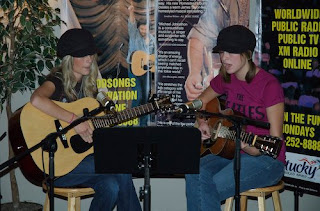 And that was just the lobby music. Chuck Leavell didn't even make it to the stage yet.

As a musician and a dad, I am convinced that the best way to teach a kid to play music is to NOT teach them. Instead, give them the opportunity and freedom to really love something. To be excited and happy about it. I always wondered if my daughter Rachel would ever be interested in music. And until last year, she didn't really show any signs of it. Oh, we tried the ballet thing. We tried the violin lessons. It all eventually fizzled out and I didn't push it in any way.

And then it happened. Rachel saw the Beatles on YouTube.
Done.
Over.
Finished.

From then on she dove into the Beatles with all the passion of a sixteen year old. She devoured every song and every chord and every record. She read books and put up posters and memorized John's harmony lines and picked Ringo as her favorite even though she would give the world to meet Paul. We watched the Beatles anthology DVD together and and ripped apart George Martin's productions. I took Rachel on a concert road trip and she packed up all her Beatles CDs and we had a real father-daughter love fest for a week.

And the next thing that happened was, "Dad, teach me the C chord ..."

After that, I never saw my Martin 00-21 again as it was held hostage in my daughter's room as she practiced and whispered and studied and tended to her sore but excited fingers. Rachel has a friend named Lauren, who also loves the Beatles and plays guitar and has a wonderful voice. They formed a duo and play, obviously, only Beatles songs. Rachel and Lauren practiced their guitar strumming and harmonies and laugh and sing and call themselves Marmalade Sky.

They had their premier in the lobby of the Kentucky Theater last night, singing in the outer lobby right before WoodSongs began. Fans mingle together, pour themselves a free cup of coffee, enjoy some conversation ... and listen to real music while waiting for the theater doors to open. Yes, I felt like the proudest daddy in the world watching my little girl preparing to sing in front of people for the very first time. I stood in the lobby as they practiced and couldn't help but appreciate the irony ... Chuck Leavell was on the show this night and he was standing next to me, watching the rehearsal.

Chuck is one of the most successful and sought after musicians on the world of rock. He played on many of the Allman Brothers hits, like Jessica. He toured with Eric Clapton and is a major part of the huge UnPlugged album. He's been a band mate of the Rolling Stones for the last 25 years.

But none of that mattered to Rachel.

She wasn't impressed with his bands or his touring. She didn't care about all the historic records Chuck plays on. There was only one thing about Chuck Leavell that rattled Rachel to her core as she shook his hand in the lobby last night ...

(Thanks to Ruth Adams for the above pic of Lauren and Rachel, and Larry Steur and Dr. Bob DeMattina for all the great photos) 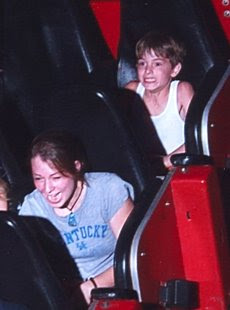 It's amazing how frightening good things can be.

Most musicians head into every project ... whether it's a tour or album ... with a mental pre-nuptial in their head. We pre-plan if not expect the inevitable demise. When the stars line up and the sea parts and it actually works, most of us stand back in shear amazement and terror. We have that, "O lordy, what do I do now" look written all over us.

WoodSongs is like that. Sort of. When I started the show in a small recording studio with 18 people in the audience who we bribed to show up with apple cider and home made brownies and one radio station willing to air it, the idea of holding the reins to a broadcast of this level would have been ... well ... scary ... but exciting.

But it's been a great summer. We've had so many spectacular artists, the WoodSongs crew continues their incredible effort and work. Our affiliate base keeps expanding. Season 3 of the Public Television series launched nationwide and season 4 is being finished as I write. My daughter Rachel and her friend Lauren put together a little singing duo, they play only Beatles songs and call themselves Marmalade Sky. Listening to them reherse in the sitting garden at the farmhouse on Sunday afternoons is so priceless.

And now we zoom forward to the impending milestone of our 500th broadcast on September 15 with the great Richie Havens as our special guest. What a spectacular way to end the summer.

Part of my summer was doing a lot of fun things with my kids. I took them on the road to Little Rock and Memphis and Nashville and lots of other places while I was on tour. We saw Batman three times and even went to a big amusement park called Kings Island. They charged my 9 year old son as an adult because he was over 42 inches, but then he was barred from riding all the cool rides he wanted to go on because he was one inch too short. I didn't like that.

But any irritation I had with Kings Island management evaporated when I saw the looks on my kids faces as they came screaming down the roller coaster.