Richie Havens and the 500th Broadcast 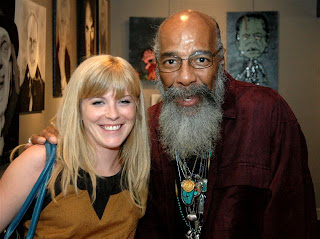 I guess the trick is simply not quitting ..eventually you can do 500 of anything so long as you keep showing up.

And so, on Monday September 15th we did the 500th broadcast of WoodSongs. And I think it went great. Our volunteer crew was sterling, the audience showed up all decked out, Joe Conkwright and Judge Ray Corns were dressed in tuxedos, Dorothy looked ravishing in her flapper girl outfit. The Hippy Chick Quartet looked smashing and played from the stage as the audience took their seats before showtime.

Me? I washed my jeans special for the night.

Anna Dickens, or "Anna the T-Shirt girl" organized the big WoodSongs cakes and the coffee pot and the tickets and the sponsor seats and did an awesome job. Here's her picture (taken by Larry Steur) with our guest of honor that night:

Richie Havens was our special guest for the entire broadcast. I've known Richie for a long time, he is a dignified, caring man. Humble to a fault. And very professional. He showed up on time, worked with our sound crew, loved the fact that they were all volunteers and really got into the spirit of the show.

I wanted Richie for the 500th show because in many ways he embodies everything we are about. Richie was one of the first big artists to leave the major record label world and start his own little company instead. Richie was way ahead of John Prine, Ani DiFranco, Arlo Guthrie and thousands of other artists who went completely independent. He always puts the music and audience first trusting that, in the end, the audience will respond to him and take care of him ... if he's good enough. And he is.

After the show, we had dinner together at Natasha's Cafe across from the Kentucky Theatre and, as tired as he was, he took care of any and all fans who came up to our table to say hi, get an autograph, snap a picture, ask a question. He never winced, never waivered, never expressed anything but pure appreciation for their appreciation.

And I guess ... when it was all said and done ... that's what we all of us are left with when the night was done ... total appreciation for the audience for making our whole WoodSongs adventure even possible.