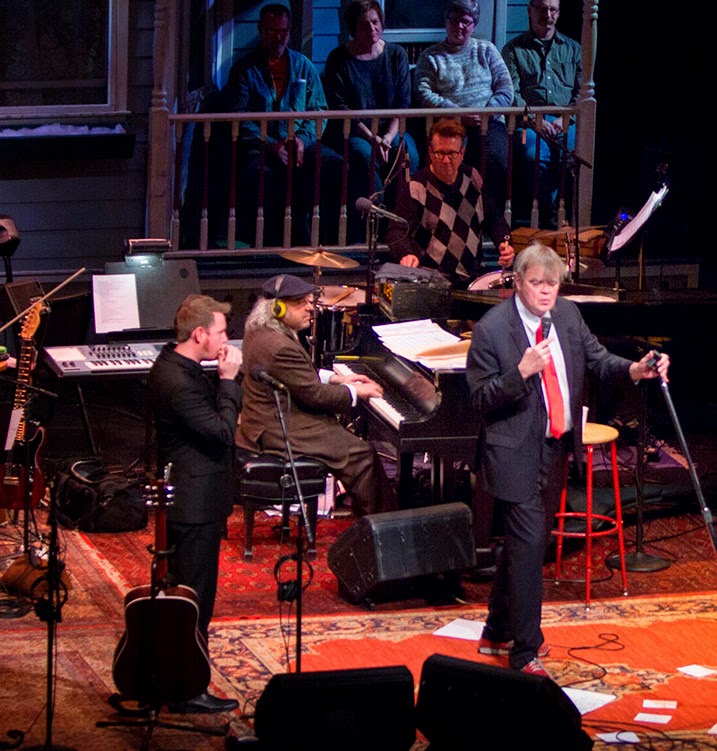 "I believe in looking reality straight in the eye and denying it." - Garrison Keillor

As we come up on WoodSongs 800th broadcast I can get a small idea of why Garrison Keillor would want to take a break, step back and listen to A Prairie Home Companion like any fan would ... sitting at home with the radio on while doing other things.

It gives you a whole new perspective of what, why and how you are doing something. Sometimes, your brain needs a ding dang break from doing something so well for so long. Garrison is the king and he deserves it.

And what better sub-host could he pick than Chris Thile? Chris has been on WoodSongs nine times in various musical incarnations. He's creative, personable, fun, happy and fearless. And APHC is about the art form, not the ratings. Because of that, they have great ratings because good art is all this audience cares about. Having  a seasoned "pro" host wouldn't serve the art form as well as having a genuine, respected artist at the helm like Chris. Garrison has done his fans and his show well. And I hope everyone tunes in, it will be a special night indeed.

I'll probably add more to this later. For now, I'm getting ready to relax and tune in A Prairie Home Companion with the wifey and the twins here at the log cabin.

We'll be listening while doing other things, too :)


So the weekend has past and we are getting ready for a WoodSongs broadcast tonight. I got to listen to most of the first hour of Chris Thile's premier as guest host ... and then the last 15 minutes or so.

Chris did a great job. Actually, he did a fantastic job. He was fun, he sounded relaxed. The music was impeccable as expected, Sarah sang like an angel ( I liked the jokes about their last names), the poet was entertaining and brilliant. Garrison's staff did a bang-up job helping Chris navigate from segment to segment ... and the guy ended exactly on time.

I think Garrison picked well asking Chris to to guest host. I understand Garrison called Thile and left a message on his cell phone about it. Considering Chris' touring schedule, Garrison got lucky.

I'm not a big fan of critics. These are folks who are often incapable of doing what they are criticizing who are given a media forum to tear down. Or build up. And I'm sure somewhere out there a reviewer will have something harsh to say. No one is ever 100% approved by the media, no matter how great or sincere.

But Chris reached well beyond his comfort zone. Garrison entrusted his legacy and years of creative sweat and placed them all on a "rookies" shoulders.

Bottom of the ninth. Based loaded. Mandolin player at bat.
Grand slam.