WALDEN: The Ballad of Thoreau 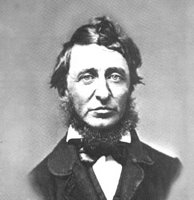 I finally finished the script of my play.

Walden: The Ballad of Thoreau is a two act, one set play about the last two days Henry David Thoreau spent in his cabin at Walden Pond.

The play takes place in September, 1847. Thoreau, a young man of 30, has contemplated his life and his place on this earth for the last two years and two months while living alone in a small cabin he built for $28. His friend and mentor, Ralph Waldo Emerson, gave Henry a small plot of land along the shores of Walden Pond near thier home in Concord, Massachusettes to make his intellectual escape.

A failed author, Henry would write in his journals everyday and imagined that, someday, his experiance alone in the woods would have meaning and importance.

The play is not a biography of Thoreau. It is a conversation and intellectual argument that occurs between to collegues who love and respect each othera greatdeal. It is a peak into what made Henry a great writer, and of the rejection he was facing. It is a play of farewell as Henry leaves the cabin on Walden Pond. Ultimately, it is a play about friendship and loyalty, of believing and supporting a writer, thinker, visionary and artist who was a generation ahead of his time.

I'll write more about the play later. My hope is to offer the script free to drama departments in high schools and colleges nationwide. We'll see. A website devoted to it will be up soon at www.WaldenPlay.com

I guess my blog has been silent since the passing of my friend. I couldn't really deal with watching his picture move down a notch. Joe loved little furry creatures much more than people, much like Thoreau. It was his passing that moved me to complete the play.