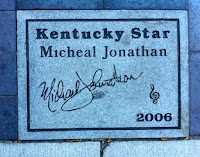 Anyone attempting to create outside of the box is a target for those incapable of the adventure.

"The music on WoodSongs is good, The host is an idiot ..."
Grey Brendle, Beaufort, SC

And so goes a recent public post on a Facebook page from someone I don't know, never met and who hasn't a clue about me at all. Every now and then, these little verbal spears appear amid the accolades, praises, applause, standing ovations, awards-with-my-name-completely-misspelled and other genuine kindnesses. And it makes you wonder:

Not "why am I an idiot." Heck, maybe I am and I just haven't realized it yet. But why would someone you don't know say something so public about someone they've never met?

Garrison Keillor is a fine man who has created an otherwise impossible broadcast of A Prairie Home Companion and, aside from all the praise he receives, he is constantly BLASTED by those who think he talks too much, can't sing, is a terrible writer, self inflated ego and on and on. All from folks who have never met the man.

Chris Thile is one of the finest musicians on earth. A sincere fellow of indescribable talent. He is stepping into the golden shoes of Garrison as the new host of A Prairie Home Companion and, amidst the great reviews of his effort, I have read some of the most scathing comments about his impending failure, his "Garrison Wanna-Be" status and bone-crippling negativity of his hosting skills.

Mainly, it seems, from the same people who hate Garrison.

Actually, they hate Garrison and hate Chris but evidently listen to the show every week for some reason in order to be qualified to make such horrid reviews regarding efforts they themselves are incapable of imagining no less accomplishing. Even on a small scale.

Garrison and Chris do great work. The difference between those two gentleman and myself, aside from the shear stature of their accomplishments, is they are paid, I am not. I created and work on WoodSongs for free. I get nothing. Not a cent, not a $ ever. The crew works for free and the artists who come on the show do so for free. The show goes free to public radio, free to public television and I was able to arrange hundreds of complete broadcasts to be archived online that anyone can watch ... for free.

Heck, my hometown newspaper, even after all these years, can't even spell my name right on those very rare occasions that I am included in a story about events that I create. Can't someone who volunteers to do something good catch a break?

All artists, dreamers, risk takers, poets and performers have a deep love for their craft. And they have an even deeper love for their audience. But presenting their creations to the scathing opinions of others is like showing your nakedness to people you already know don't like you. "Michael is an idiot. He can't sing. He can't play. He's ... blah blah blah"  Especially considering the enormous amount of stress, responsibility and pressure a project like WoodSongs would place on someone. Can you imagine doing 44 of these productions a year ... with virtually no money to operate on? Harsh criticism, especially in public, is the most disheartening, demoralizing thing in life ... and it can wound deeply.

Until you realize a very simple, basic truth: haters are even more scared and more lonely than you are. They swim in a deep pool of insecurity and such low self esteem that their only salvation is the self elevating illusion that comes from looking down on those they perceive accomplish more than they can.

I think, in the end, the words of harshness become irrelevant to the work at hand. Like any worthy endeavor the artist, creator or dreamer only achieves their goal by keeping their head down, their spirits up ... and band aids handy for the wounds that come from those critical of what they themselves are incapable of doing. Sometimes a critic can make you better, they can sharpen you like a blade against a stone. They can also so rip into your spirit so deeply it makes you feel like quitting.

The point is nothing we do should be for any other reason than for the love of it. Love is the greatest transaction of the arts, and haters have no place in that world. They are, at best, jealous onlookers.

Recently a very good friend of mine, David McLean, came up with an idea of an award show that he himself couldn't be part of. I watched him get blasted from all onlookers ... at first. But he kept his chin up and didn't stop and now he is a hero. I'm proud of David. His heart proved more powerful than those who denied his efforts.

I'm sure Mr. Brendle is a fine fellow and I can sort of imagine him sitting in front of a TV watching WoodSongs muttering and throwing his popcorn at the TV set every time "that idiot" comes on the screen. And that's ok, because his harsh review means he is watching the show, the very thing we all work so hard ... and for free ... to accomplish.

It's just a shame the only thing I know of the gentleman is his public unkindness. Maybe, someday, Mr. Brendle will accomplish something so wonderful they will place a star along Main Street in his honor with both his names misspelled, too.

But in the meantime, back in 1937, Finnish composer Jean Sibelius said it best:

"Fear not the words of a critic, for no one ever erected a statue in honor of one."


Posted by Michael Johnathon at 6:57 AM

Well said Michael, Well said. I've been a dreamer as well. I did Blue Grass Today from 1986 until 1999 and like you, never made a cent. Spend many a dollar and enjoyed the ride. A few other projects has followed and finally came to the reality that anything I did I viewed as a personal development project....and if others benefited...fine, but on life I was the main beneficiary.

i am a dreamer